Hey You! Get Out of My Way! 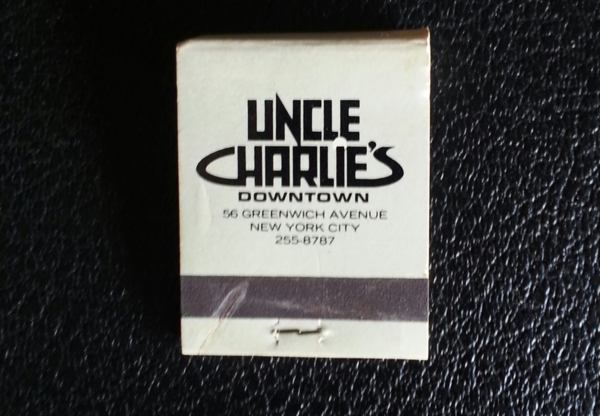 One of my first jobs in NYC was working at a Gay bar named Uncle Charlie’s. Uncle Charlie’s was located at 55 Greenwich Avenue in Greenwich Village. It was a quiet storefront located on a neighborhood street.

What you couldn’t see from the front door was that Uncle Charlie’s was large and had four bars under one roof. There was also a dance floor in the middle of one of the rooms. It was a room that played videos and had mirror-covered walls. Everyone who worked there referred to it as the “Stand and Stare” room because there was very little dancing going on and a lot of standing and staring going on. In every room there was a television playing comedy videos and music videos. Every now and then a full movie would be shown.

“Deep in Vogue” by Malcolm McLaren was a big hit at this time. When Willi Ninja, the star of the video would walk in, I would make Scott or Charlie, the DJs, play the video. Willi would get embarrassed and give me a little wave. Willi was a great guy, and I loved talking to him.

Around this time, I moved into a carriage house on 13th street between Greenwhich and 7th avenues. Café de Bruxelles was on the corner (another place where I worked as a waiter) and the Gay and Lesbian Center was diagonal from my front door. Uncle Charlie’s was further up the block and was across from the Dew Drop Inn. I was “Jack of all trades” at Uncle Charlie’s. I worked as a cocktail waiter/doorman/occasional bartender and expert rat killer/dodger.

Charlie’s had two owners at this time. One owner was an old queen named Gary who would arrive at work during the winter in a ratty old fur coat, his face overly suntanned, and have a “boy du jour” on his arm. Usually this was some skanky call boy who ordered the staff around because he was dating “the boss”. Little did he know that his power would only last the one night, or until Gary got bored. To my knowledge, the longest a twink stayed around was about a month.

The second owner was silent. He wasn’t physically present in the club. He was actually on the run from the police for murdering his lover. It was a huge torrid story, one we were not allowed to mention while on the premises. It did however make it into the papers, and every now and then the FBI would check in.

The silent partner did, however, have his son, Seth (who didn’t want to be there) running the business and counting the money in his absence. Seth was married with a wife and kids at home. This was the last place he wanted to be. Seth would often call you into the office and try to intimidate you. The office was in the basement and you had to walk down long crooked stairs (well actually half stairs/half slide for booze). He was usually on the phone when you got there and he would signal you to have a seat. Then, in between pauses with whomever he was talking on the phone, he would tell you what he expected of you that night. That way he rarely had to come upstairs and make an appearance during the evening. When he was done with you, he would wave you away with the flip of his hand and continue his phone conversation.

One of my favorite bartenders who worked there was Steve. Steve was sweet and kind, and usually drunk by the time the night was over. He would also overpour a drink so you could join him in his drinking. He loved to make B52s and Mind Erasers. Steve looked like an L.L. Bean model, and was actually an actor on the side.

Another one of the bartenders was named Joe. He was also an actor, but unlike Steve, most of the patrons had seen his work. He was the star of “The Pizza Boy: He Delivers” and yes it was exactly what you imagine it might have been. He was the guy in the film who ordered the delivery. We were warned that if you ever wanted Joe to give you drinks or not make your night really bad, you were not to mention his film resume anywhere around him. He was this big Italian jock with a crooked smile and a thick Brooklyn accent. He was also one of the dumbest people I have ever met.

Every now and then someone would run out of liquor and whoever was not doing something would go get it from the basement. On the way, there was a maze of beer boxes of stacked to the ceiling. One of the favorite games of the employees was to toss glass bottles of beer at each other as someone would enter the maze. If you got to the end of the maze first, you would grab loose beers and throw them over the boxes into the maze. The beers would hit the floor and explode like mini grenades, showering whoever was in the way with sticky foam.

Also living in the maze were rats. Now, I’m talking NYC rats, smart, cunning, and scared-of-nothing NYC rats. They would dive at you on your way through the basement. The cellar doors opened onto the street so our busboy David could bring the garbage right outside. Rats seeing a good thing would scurry inside and set up home in the basement.

David the barback (a runner who stocks the bar with ice and alcohol) was nice but a little odd. He was my age, but told everyone he had fought in the Vietnam war. He dressed every night in army fatigues and carried a large knife. The knife was for the occasional waiter threatening and rat beheading. Our manager Jeff actually had been in Vietnam and would have “flashbacks” during work. These usually caused him to stop working and stare blankly into space.

Our front door was protected by John; he was a really nice guy who modeled his look on “Super Fly”. He sported a large Afro and had a black belt in Karate. John refused to show us any tricks because in his words, “Karate is no joke.” During the fall and winter, we would add Alan to our family. He would set up a coat check in a little cubby across from the front door. The word was to never go into Alan’s booth unless you wanted to get felt up and believe me, no one wanted to be felt up by Alan.

One time while I was working a shift, a patron who had been coming to the club for several weeks decided that he was going to take me home. He took my tray, threw it to the floor, tossed me over his shoulder, and made a run for the front door. This guy was 250 pounds 6’3”, and had the thickest Russian accent I’d ever heard. Everyone thought it was a joke until I started screaming and he pried my fingers off the door jamb as he dragged me out the door.

Geoffrey Doig-Marx GDM holds all written and electronic rights to his writing “A Day in the Life/Down the Rabbit Hole”. It cannot be reprinted in part or whole without his written consent.

By GDMJanuary 17, 2022Leave a Comment on Enter the Ninth Circle Part 2